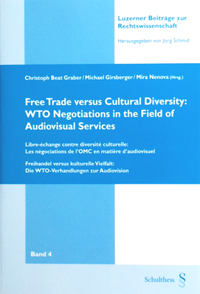 Free Trade versus Cultural Diversity: WTO Negotiations in the Field of Audiovisuals Services

The relation between free trade and cultural diversity has been one of the most disputed issues in the negotiations concerning the liberalisation of international markets for audiovisual media. This was true for the Uruguay Round of the GATT and will hold true for the ongoing trade talks of the Doha Development Agenda.

The reason for the dispute is the dual reality of audiovisual media as commodities and as cultural artefacts, as well as their intrinsic importance in economic and societal terms. The positions on how audiovisual media should be addressed and regulated vary from the extreme of the notorious "exception culturelle" to that of absolute liberalisation with plenty of nuances in between. From a global perspective, the compromise to be found between these positions in the current Doha trade negotiations – or the lack of finding it – will be crucial for the fate of audiovisual media.