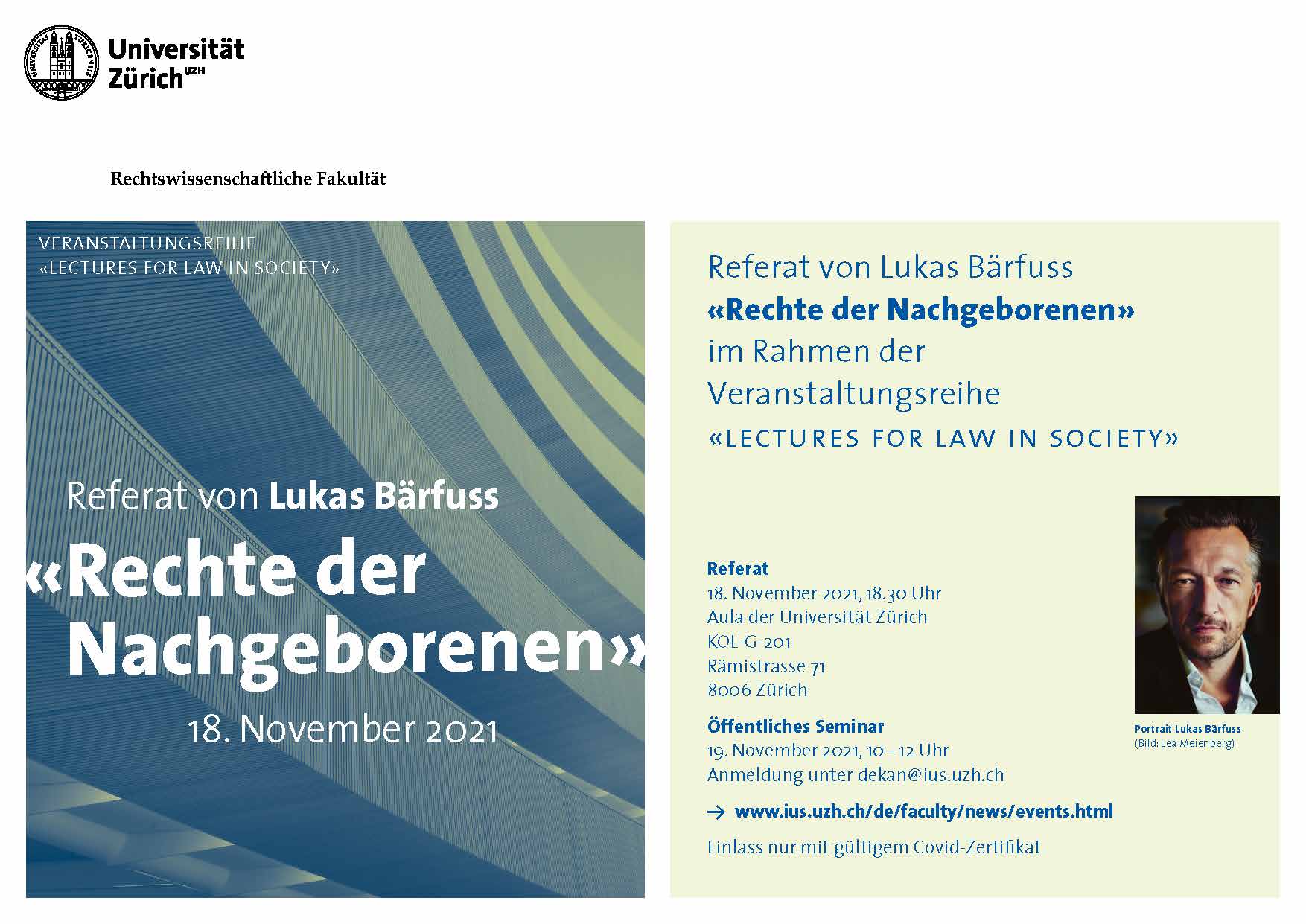 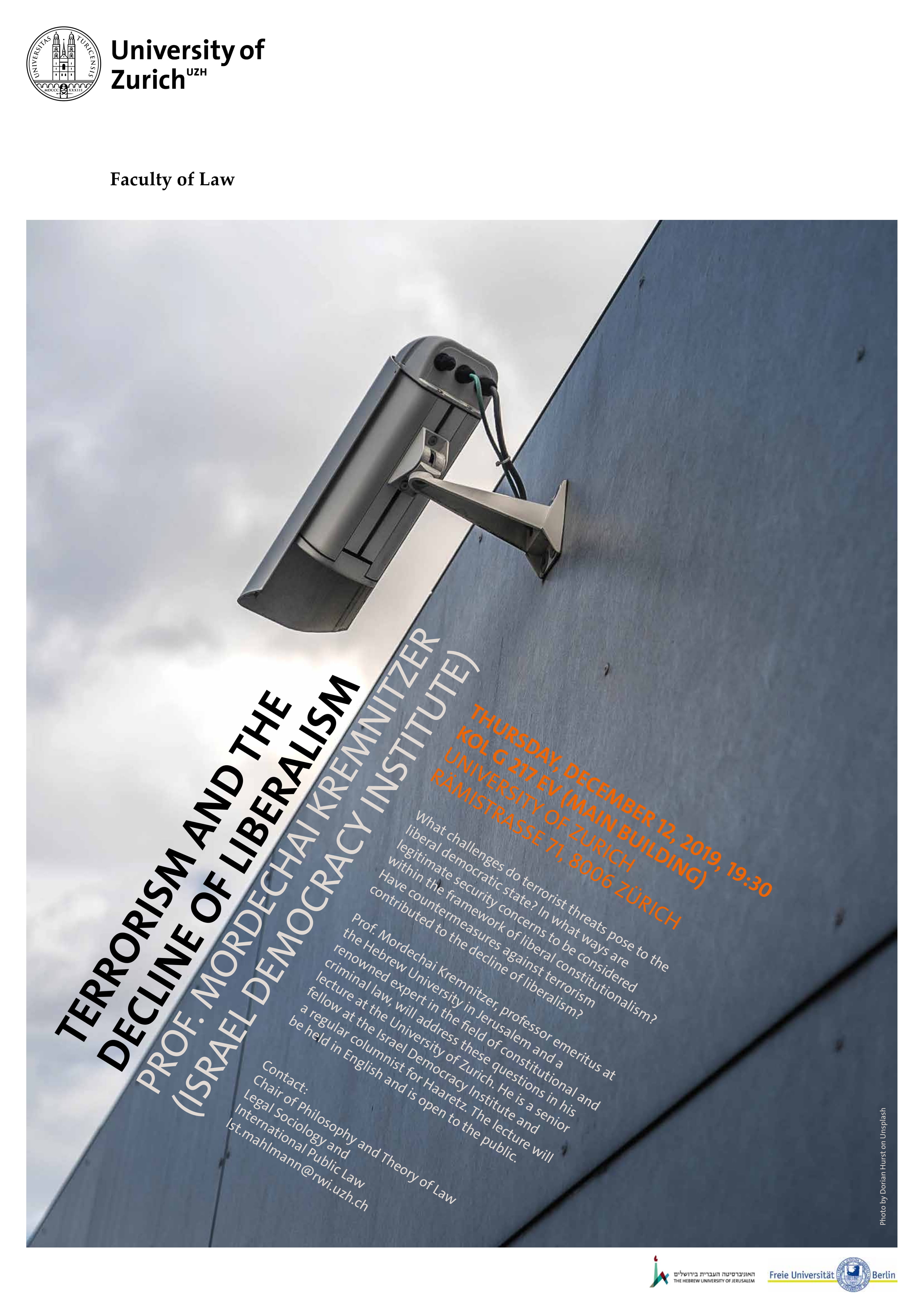 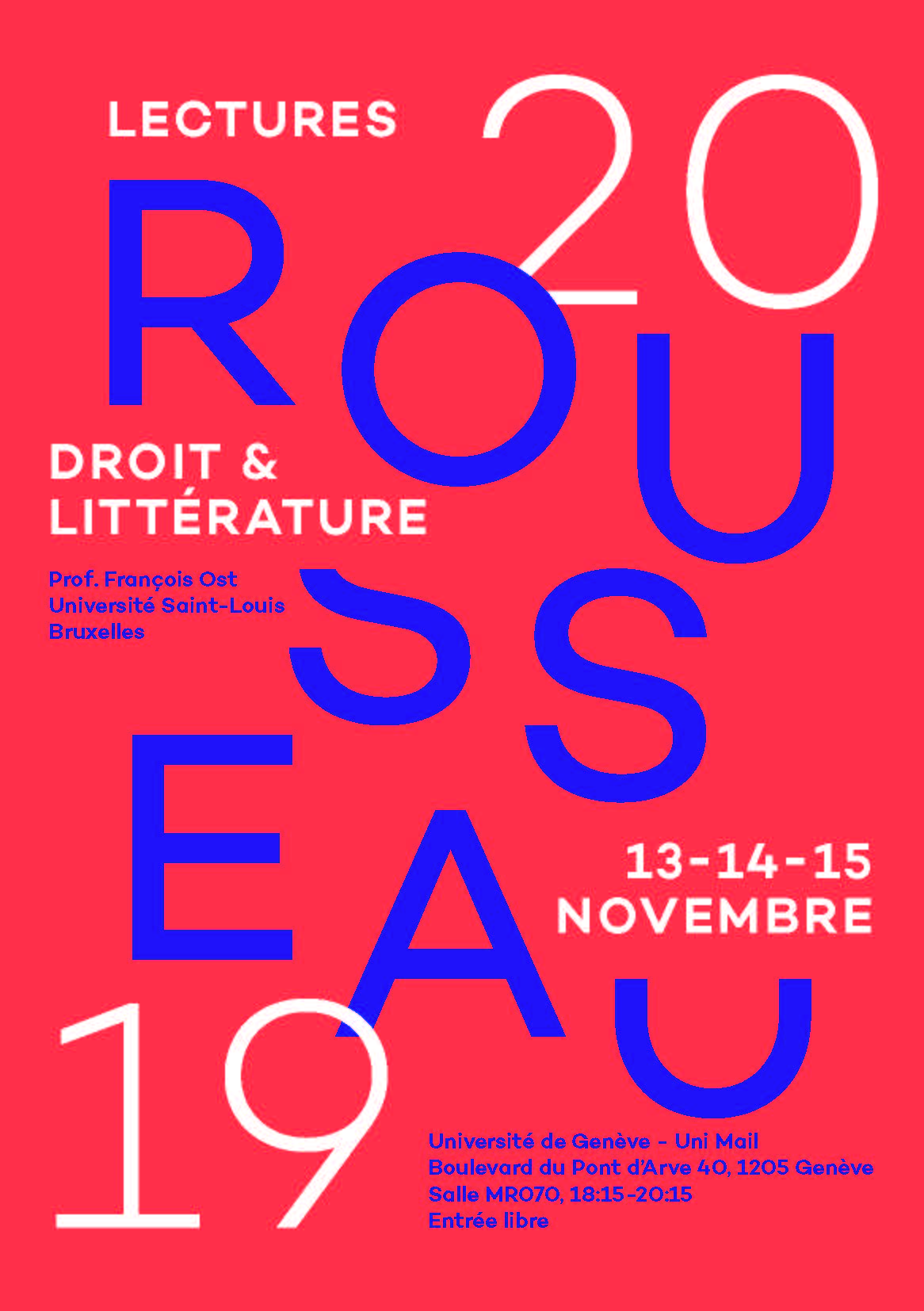 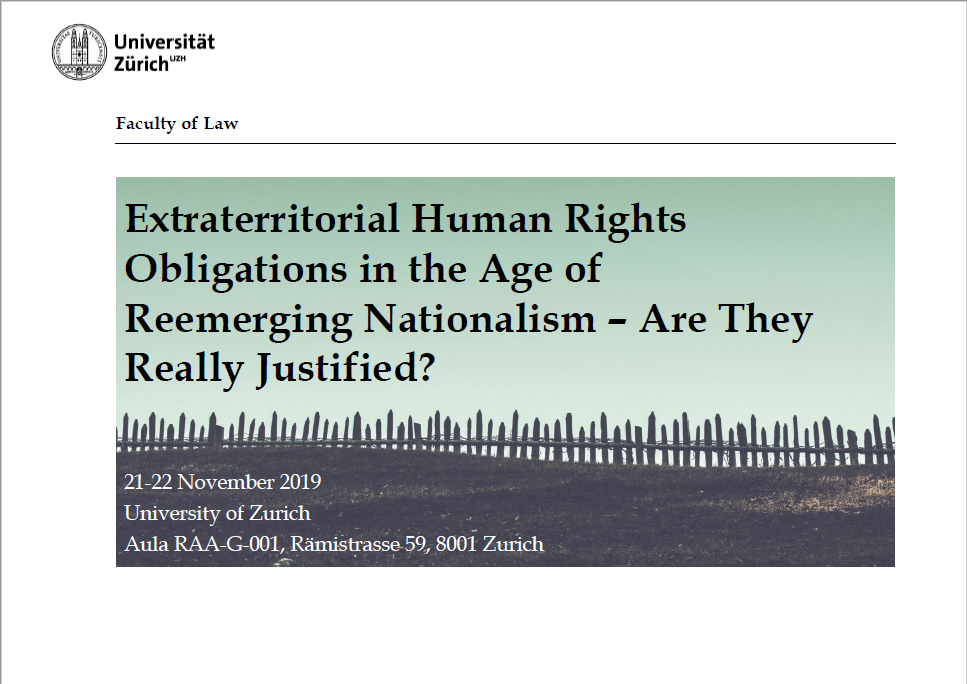 Public lecture (PDF, 889 KB) by Lukas Barfuss, part of the series «Lectures for law in society»

The lecture was part of the joint workshop "Human Rights in Contemporary Conflicts" with the Hebrew University Jerusalem and Free University Berlin, which was held at the University of Zurich, from December 12 - 13, 2019.

The joint workshop was generously supported by the Graduate Campus.

Conference "Extraterritorial Human Rights Obligations in the Age of Reemerging Nationalism - Are They Really Justified?"

If extraterritorial application of human rights shall be realized and implemented in practice, it seems necessary to return to addressing the foundational question of their justifiability as well as counter arguments that promote a territorial limitation of states’ human rights obligations. By combining legal and philosophical perspectives, this is the aim the workshop hoped to achieve.

The second edition of the SVRSP Rousseau Lectures will be held at the University of Geneva from November 13-15, 2019. More information on the programme is available here (PDF, 536 KB).

Further information on the XXIX World Congress of the International Association for the Philosophy of Law and Social Philosophy, which took place in Lucerne from 7th to 13th July 2019, may be found via following link: : Website IVR Congress 2019 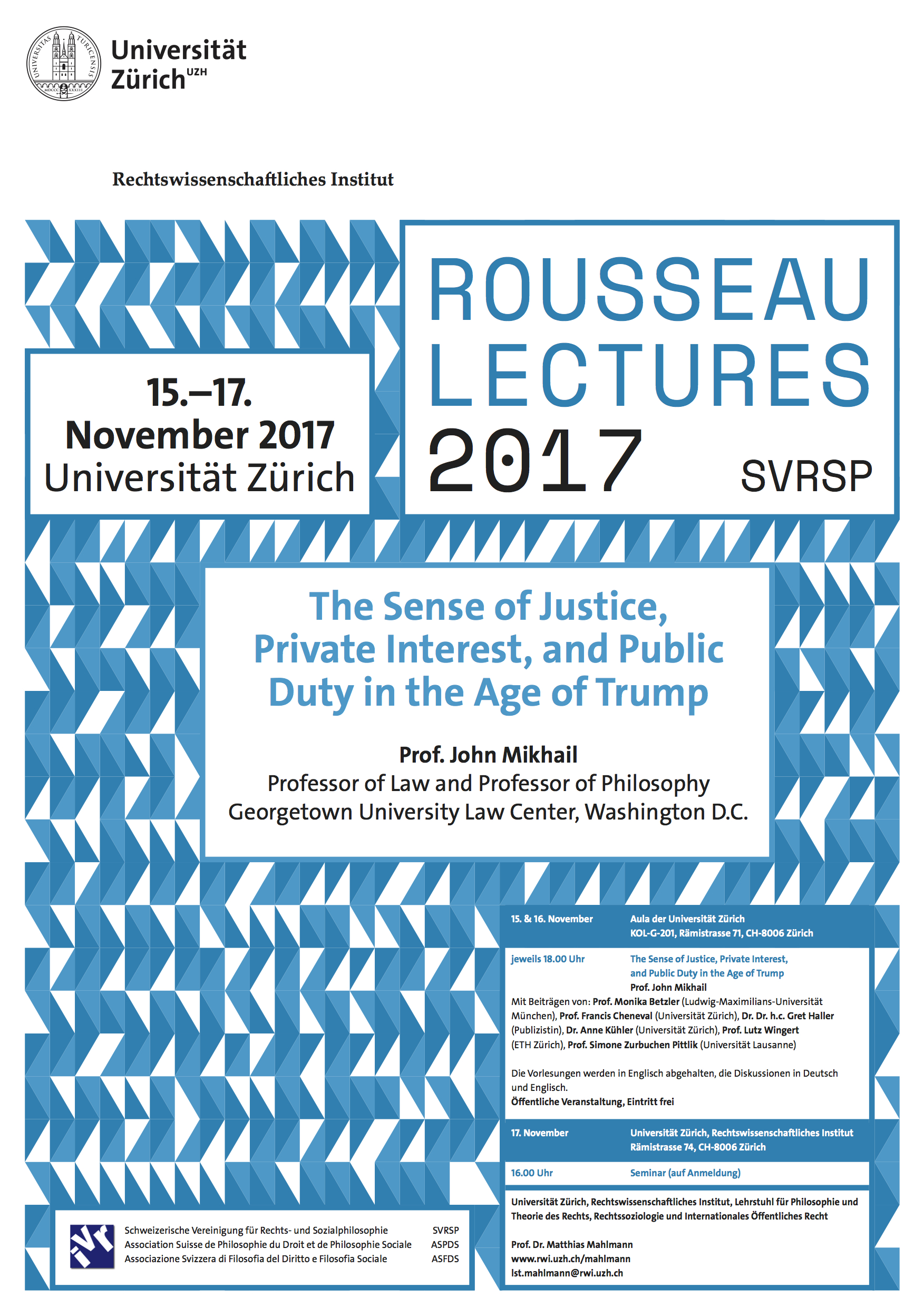 "The Sense of Justice, Private Interest, and Public Duty in the Age of Trump"

Pictures of the Event:

In November 2017, the Swiss Association for Legal and Social Philosophy organized the first SVRSP Rousseau Lectures. The lectures would like to contribute to the public debate on fundamental questions of law, state, international order and justice. In times in which political conflicts in democratic constitutional states are widespread and the international order is undergoing a profound crisis, it is essential to reaffirm the foundations of legal orders in order to defend them against enemies as well as against indifference or carelessness.

Prof. John Mikhail (Georgetown University, Washington D.C.) addressed such basic questions in his two-part lectures on «The Sense of Justice, Private Interest, and Public Duty in the Age of Trump». The lectures embodied both historical as well as substantive and contemporary perspectives of legal philosophy.

The discovery of functional magnetic resonance imaging (fMRI), which permits non-invasive imaging of brain function, was an immense scientific breakthrough that seemed to create the possibility of previously unimaginable understanding of the relation between brain function, mind and behavior. Legal academics and lawyers, especially within criminal law, were quick to embrace this new technology. Some thought new discoveries might cause profound changes in legal doctrine and practice and perhaps even revolutionary reforms. This talk addresses the current state of law and neuroscience and suggests that legal changes based on neuroscience have been few to date and that contributions for the foreseeable future will be modest. 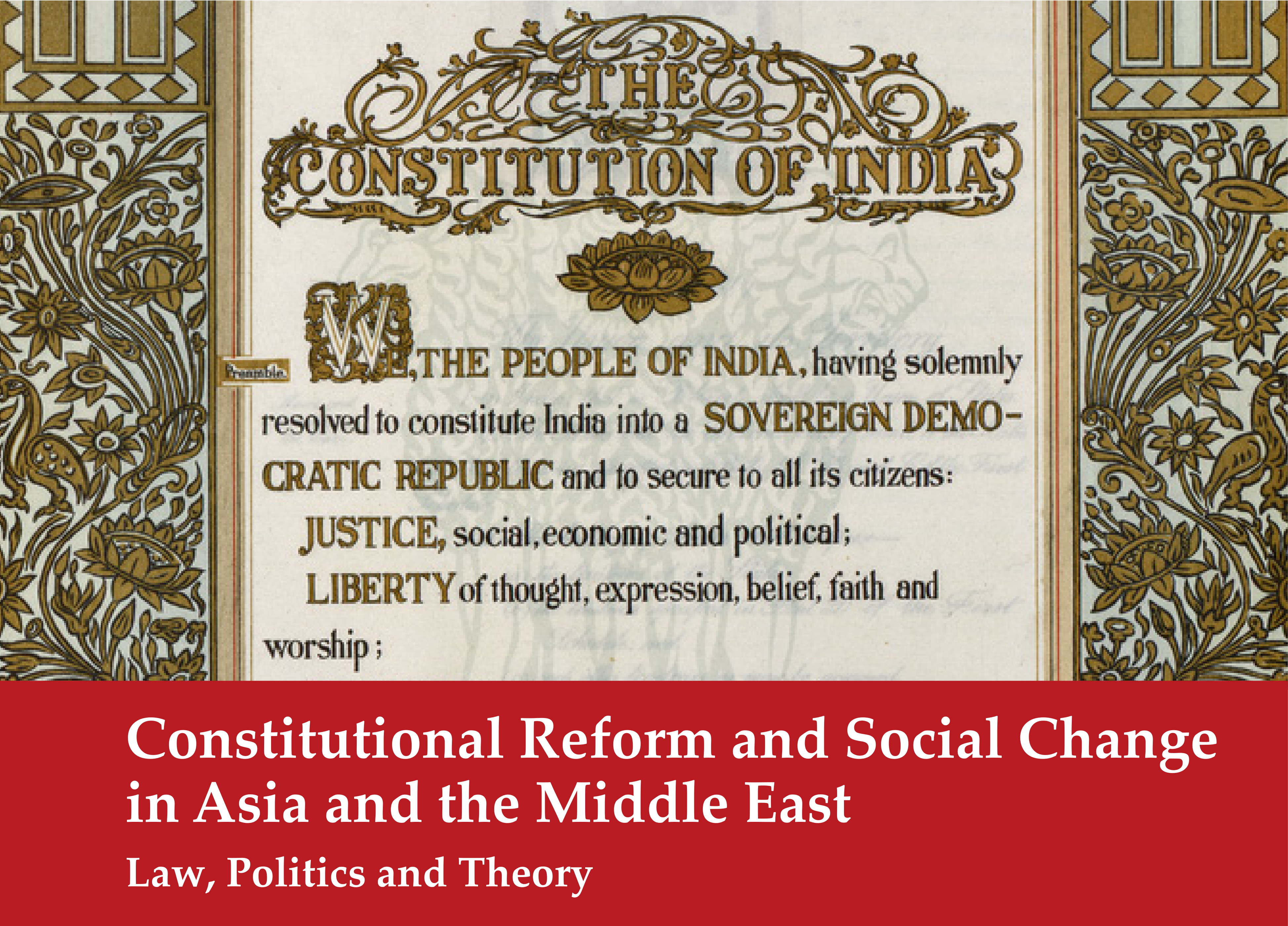 For more information, please see the Website of the URPP Asia and Europe Websiteand the preview in the "UZH news"-section.

In the lecture, Professor Chibli Mallat presents the most challenging themes to constitutionalism in the aftermath of the Arab Spring. He will discuss in particular: religion in the constitution, the sectarian conundrum, civil society and the state, and the (Swiss) model of rotating executive. These themes are examined extensively in his new book, Philosophy of Nonviolence: Revolution, Constitutionalism, and Justice beyond the Middle East, Oxford University Press 2015.

Since about the start of this millennium, the political movement in Japan has been enlivened by efforts to revise its democratic Constitution, striving towards an emperor led totalitarian military State. The Japanese population that enjoyed its freedom and peace during the second half of the 20th century, does not show much reluctance to the new supporters of restoration. In order to better explain this contradictory phenomenon, I will analyze the peculiar mode of reception of democracy by the post-war Japanese and its current consequences.

In recent years, there has been considerable debate in the field of comparative constitutional law on the issue of social rights and their enforcement by the judiciary in particular. This talk will engage with these debates by focusing on the record and experience of the Indian judiciary in enforcing the social rights provisions of its Constitution. The Constitution of India contains several provisions relating to social rights, many of which are housed in a part of the text that is expressly stated to be 'non-justiciable.' Over time, however, the Indian judiciary has, through a process of creative interpretation, mandated that the executive and legislature take proactive steps towards the implementation of these rights provisions. The talk will focus on this process, which has been the subject of considerable controversy but has, over time, gained the qualified support of progressive communities in India. The talk will focus on cases from the early 1980s through to more recent cases in the new century, and will also cover the scholarly literature in India and abroad that has developed around these issues. Finally, the talk will seek to draw contrasts and comparisons with the approach to social rights taken by judiciaries in South Africa and Colombia in particular.